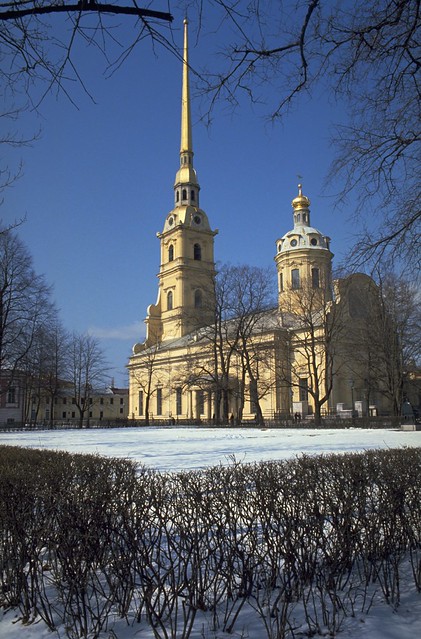 Built on Zayachy Island, between 1712 and 1733, the cathedral’s bell tower is the world’s tallest Orthodox bell tower. It also acts as a lightning rod protecting the cathedral.

The cathedral houses the remains of most of the Russian emperors and empresses from Peter the Great to Nicholas II; including Catherine the Great, Empress of Russia for 34 years.

The Historic Centre of Saint Petersburg and Related Groups of Monuments was declared a World Heritage Site by UNESCO in 1991. 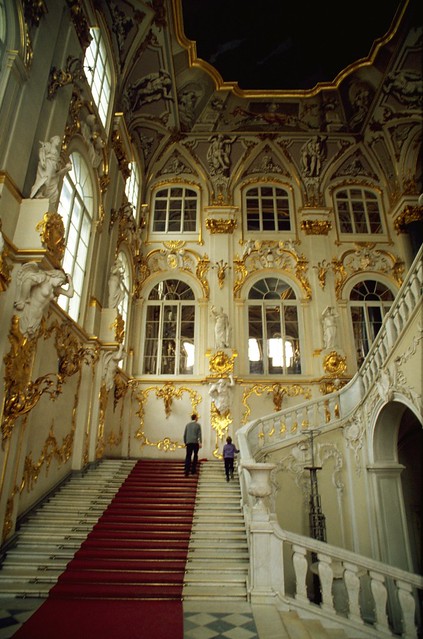 One of the largest and oldest museums in the world, the State Hermitage in Saint Petersburg was founded by Catherine the Great, in 1764, and has been open to the public since 1852.

The Jordan Staircase of the Winter Palace leads up to the exhibition rooms.

Although badly damaged by fire in 1837, the original plans from architect Francesco Bartolomeo Rastrelli were used for the reconstruction of this grand state entrance.

I waited for the small child to move up the marble stairs to help illustrate the grand scale of the elaborate detail before our eyes. 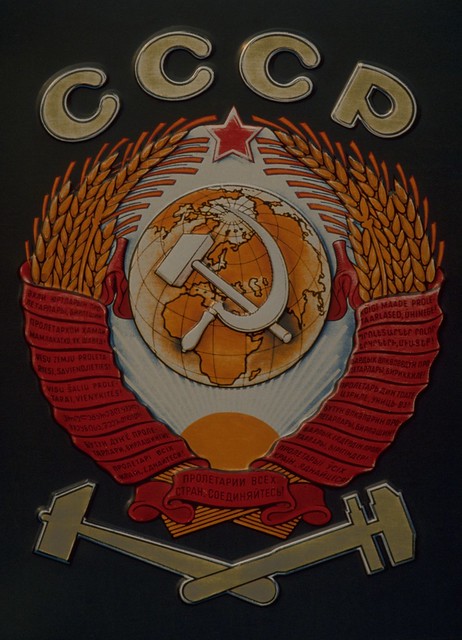 When I travelled by rail from Moscow to Saint Petersburg in April, 1992 I was glad to see the Soviet State Railway Emblem still on the train.

The dissolution of the Soviet Union had taken place in December 1991 and Russia was now briefly a member of the Commonwealth of Independent States, or CIS.

The State Emblem of the Soviet Union (some call it a coat of arms) shows a five-pointed red star above the traditional hammer and sickle over a globe, with ears of wheat around it.

There is a rising sun under the globe, and a red ribbon around the two wreaths of wheat with ‘Proletarians of the world, unite!’ written in the official languages of the Soviet Republics.

If you’re interested, the languages are Turkmen, Tajik, Latvian, Lithuanian, Georgian, Uzbek, and Ukrainian on the left; Estonian, Armenian, Kyrgyz, Moldovan, Azerbaijani, Kazak and Belarusian on the right; with Russian joining them all together at the base. 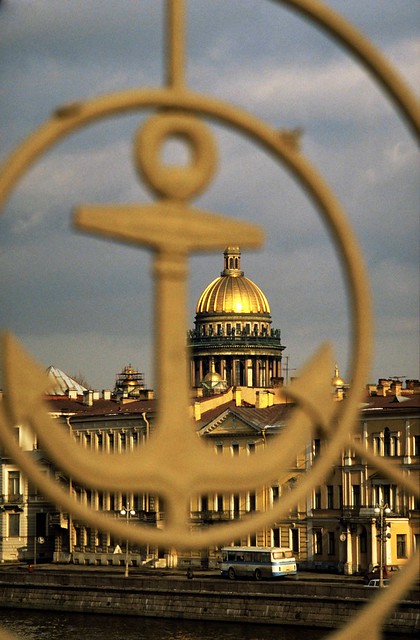 Saint Petersburg is located on the Neva River, at the head of the Gulf of Finland; the easternmost arm of the Baltic.

On a photo walk in Russia’s second largest city I chose to frame the golden dome of Saint Isaac’s Cathedral within an anchor; to emphasize Saint Petersburg’s connection with the sea.

Founded by Peter the Great in 1703, Saint Petersburg became the imperial capital of Russia until 1918.

The Baltic port was also known as Petrograd in 1914, then Leningrad in 1924, before reverting back to Saint Petersburg in 1991. 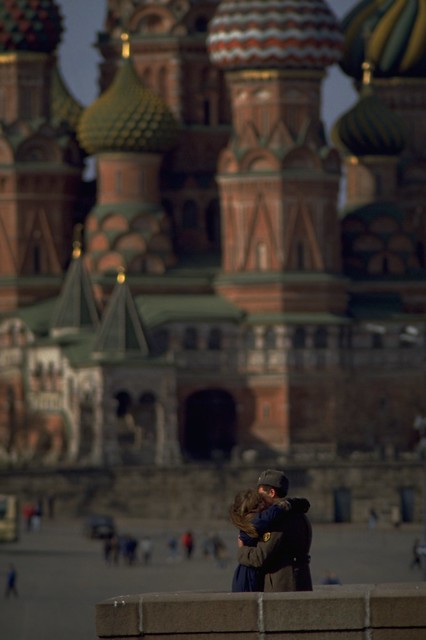 Romantic reunion between a Russian Soldier and his girlfriend in Moscow’s Red Square with The Cathedral of Vasily the Blessed (Saint Basil’s Cathedral) in the background.